NEWARK – Today the New Jersey Institute for Social Justice and the Prison Policy Initiative released a new report, Where people in prison come from: The geography of mass incarceration in New Jersey, that provides an in-depth look at where people incarcerated in New Jersey state prisons come from. The report also provides eight detailed data tables — including neighborhood-specific data for Newark and Jersey City — that serve as a foundation for advocates, organizers, policymakers, data journalists, academics and others to analyze of how incarceration relates to other factors of community well-being.

The data and report are made possible by the state’s landmark 2020 law that requires that people in prison be counted as residents of their hometown rather than in prison cells when state and local governments redistrict every ten years.

Data tables included in the report provide residence information for people in New Jersey state prisons at the time of the 2020 Census, offering the clearest look ever at which communities are most impacted by mass incarceration. They break down the number of people locked up by county, city, town, zip code, legislative district, census tract and other areas. 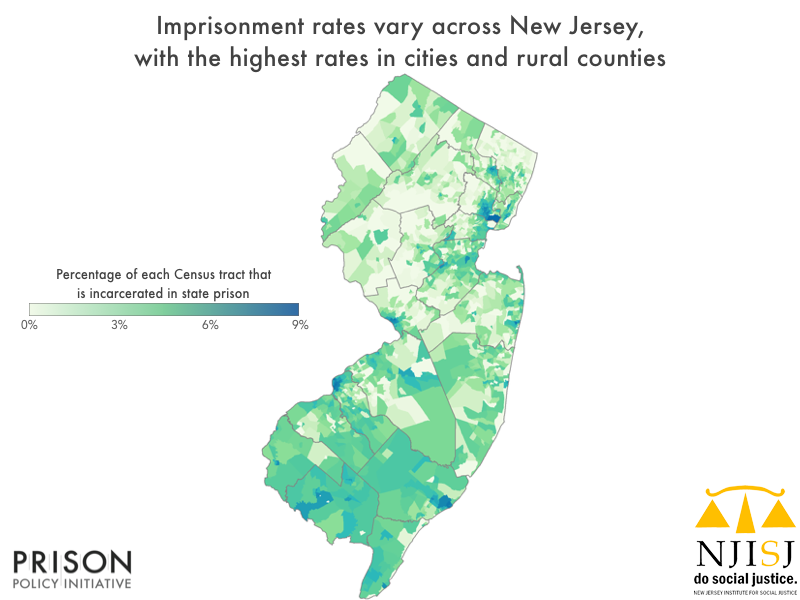 “The nation’s 40-year failed experiment with mass incarceration harms each and every one of us. This analysis shows that while some communities are disproportionately impacted by this failed policy, nobody escapes the damage it causes,” said Emily Widra, Senior Research Analyst at the Prison Policy Initiative. “Our report is just the beginning. We’re making this data available so others can further examine how geographic incarceration trends correlate with other problems communities face.”

The report cites studies that show that incarceration rates correlate with a variety of negative outcomes, including higher rates of asthma, depression, lower standardized test scores, reduced life expectancy and more. The data included in this report gives researchers the tools they need to better understand how these correlations play out in New Jersey.

“Eliminating prison-based gerrymandering in New Jersey was not only a huge win for achieving fairer representation for incarcerated people, but it also allows us to see, down to the neighborhood-level, the true costs of mass incarceration in New Jersey,” said Henal Patel, Director of the Democracy & Justice Program at the New Jersey Institute for Social Justice. “The availability of this new data makes room for much more targeted and robust policy solutions to some of the often race-related inequities in the Garden State.”

This is the second in a series of reports examining the geography of mass incarceration in America.

New Jersey is one of more than a dozen states and 200 local governments that have addressed the practice of “prison gerrymandering." which gives disproportional political clout to state and local districts that contain prisons at the expense of all of the other areas of the state. In total, roughly half the country now lives in a place that has taken action to address prison gerrymandering.