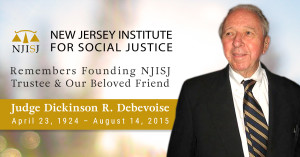 April 23, 1924 – August 14, 2015 For more than 35 years, Dickinson R. Debevoise served with unparalleled distinction as a federal judge in New Jersey until his death at 91. A brilliant jurist, Judge Debevoise dedicated his life to pursuing justice, equality, and opportunity. He passed away peacefully at his home on August 14, 2015. Upon his passing, Chief U.S. District Judge Jerome Simandle said, “Our court has lost one of its greatest judges ever.” Judge Debevoise was nominated to the United States District Court for the District of New Jersey by President Jimmy Carter in September 1979, and confirmed by the United States Senate the following month. He assumed senior status in 1994 and served an extraordinary 21 years as a senior judge.

During his 35 years on the bench, Judge Debevoise earned a reputation as a consummate jurist, deeply admired and respected for his powerful intellect, fairness, and passionate commitment to justice. Judge Debevoise began his lifelong public service in the United States Army during World War II, for which he earned a Bronze Star Medal. He also became active in the civil rights movement of the 1960s, both representing and recruiting other attorneys to represent, civil rights workers in Mississippi during the 1964 Mississippi Freedom Summer. Reflecting on his life’s work, Judge Debevoise later explained that one of his proudest professional accomplishments was establishing Newark Legal Services in 1965, an organization that provides legal services and advocates for New Jersey’s poor and marginalized residents. Consistent with his commitment to public service, Judge Debevoise served as the New Jersey Institute for Social Justice’s founding board vice-president, trustee, and ultimately trustee emeritus. In that capacity, he helped to create, shape, and advance the Institute’s mission. We are profoundly grateful to have had the opportunity to work with Judge Debevoise and honored to commemorate and advance his enduring legacy through the Dickinson R. Debevoise Social Justice Legal Advocacy Fellowship.