What is the Census and how often is it done?

Every 10 years, through the U.S. Census, the United States is constitutionally required to count every single person living in this county. The next Census is on April l, 2020 - and tis critical that we get it right because we will live with the consequences for the next 10 years.

Who is counted in the Census?

Everyone – all adults, all children, all immigrants – must be counted.

Why is it important, particularly for communities of color, to participate in the 2020 Census?

1. Federal Funding for Essential Programs that Empower our Communities Rely on Census Data.

The Census is used to determine how much federal funding we receive for essential programs. New Jersey receives more than $17.5 billion from the federal government.1 This federal funding supports school breakfast and lunches; pre-school, after-school/ child care, and summer programs; WIC, immunizations, and Maternal & Child Health; and construction of better roads and safer bridges.

New Jersey has one of the worst racial wealth gaps in the county. The median net worth for New Jersey's white families is highest in America.2 By stark contrast, it was only $5,900 and $7 ,020 for Black and Latino families in 2018. This racial wealth gap will only widen if these programs are not adequately funded.

The 2020 Census count will determine how many representatives New Jersey sends to Congress, and the number of vots we have in the Electoral College. They are also used to draw state and federal legislative districts. We now have two fewer representatives and two fewer electoral votes than we had in 1990.

3. Census Data Are Used to Enforce and Protect our Civil Rights.

Census data help to enforce civil rights laws like the Voing Rights Actof 1965 and the Civil Rights Actof 1964. They are used to determine whether or not an election district affords Black votrs and other voters of color an equal opportunity to elect their candidates of choice.

So, what’s the problem?

So, what's the problem?

1. There is a Significant Risk of Undercounting People in "Hard-to- Count" Communities.

The 2010 Census missed an estimated 16 million people, disproportionately people of color, from "hard-to-count" (HTC) areas. HTC communities are areas where fewer than 73% of the residents returned their Census forms in 2010. Almost a quarter of New Jersey's population lives in HTC areas3. People of color, low- income individuals, young children, immigrants, transient people, and those with severe fear or distrust of the government are most likely to go unwanted. At the same time, the 2010 Census counted 36,000 people more than once, a disproportionate number of whom were white.4

New Jersey has HTC areas in 18 out of its 21 counties. There's a good chance that if we don't act now, New Jersey will be undercounted.

In the 2010 Census count, Black people were the second largest racial or ethnic group undercounted, only behind the American Indian and Alaskan Native population. As a result of undercounting Black communities were denied access to critical resources. New Jersey is eighth in the nation for its number of African-Americans living in HTC tracts (670,018)5 and fifth in the nation for its percentage of African-Americans living in HTC tracts (51%)6

This list describes the full and final response rate of the top Black/ African-American hard-to-count New Jersey cities in 2010.7 The undercount was severe in certain areas. 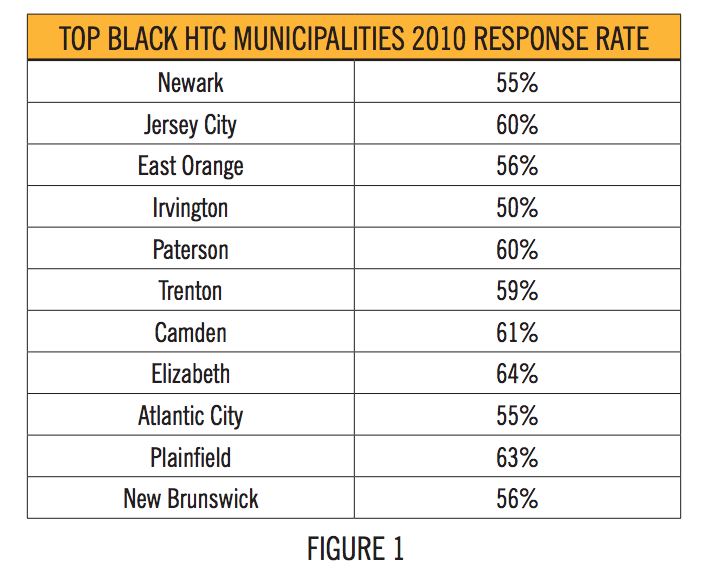 These same communities often have the highest poverty rates and are most in need of essential services. Without special, intentional, and targeted outreach efforts, hundreds of thousands of our residents in communities most in need of resources will go uncounted in 2020 and for the next 10 years.

This chart shows the New Jersey cities with the highest numbers of Black residents living in HTC areas.9 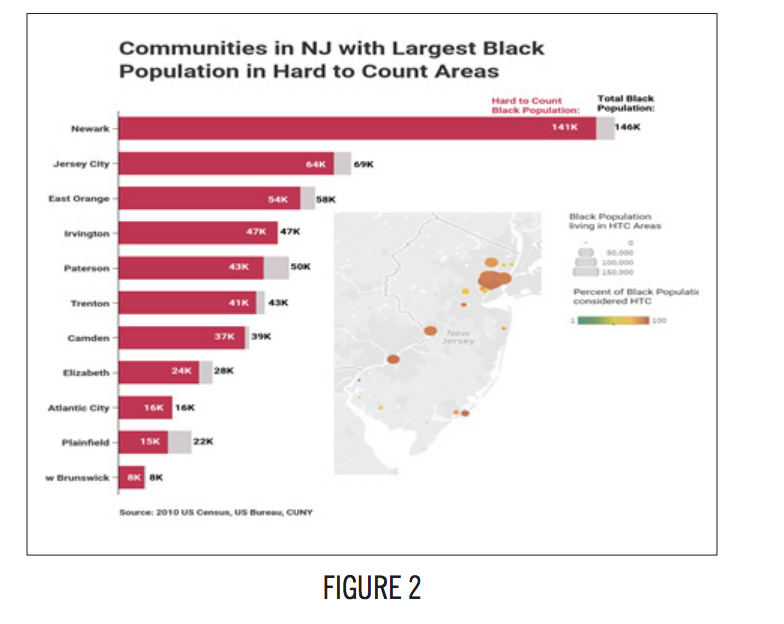 For the first time, 80% of households will receive postcards urging residents to complete the Census online. While this may be convenient for some people, it will present challenges to many who have limited or no Internet access, or who are uncomfortable with providing information online.

How is the Census taken?

Should someone who can’t vote still participate in the Census?

Yes. Everyone counts and everyone’s count makes a difference. Every person’s participation helps their community and its children by determining the median income level of the community. Those numbers will bring needed assistance through federal dollars back to the community in the form of public health, construction of federal roads, and school aid.

Will there be a citizenship question on the Census?

No. The Supreme Court of the United States ruled the Department of Commerce could not add a proposed citizenship question to the 2020 Census based on the reasons the government provided for including it. On July 2, 2019, the Census Bureau formally requested the printing of 2020 Census forms without the citizenship question. This decision ended uncertainty around the citizenship question on the Census. The Secretary of Commerce stated that the department’s focus “is to conduct a complete and accurate census.” The Department of Justice also confirmed to the judge overseeing the litigation that the question will not be added to the 2020 Census.

Are non-citizens, both documented and undocumented, counted?

Yes. The Census counts both citizens and non-citizens, including undocumented immigrants. Historically, undocumented immigrants have been undercounted. Difficulties with the English language affect the ability of many individuals to understand and answer the Census. Although the controversial citizenship question will no longer be printed on the Census, many non-citizens may still be suspicious of government agencies and fear that responding to the questions in the Census may result in their deportation or incarceration by immigration and law enforcement officials. While federal law prohibits personal information from being shared, even with another government agency, many are understandably still worried.

Are there available jobs with the Census Bureau?

1. Is the Census Bureau hiring?

2. Can I be considered for a Census Bureau job if I have a criminal conviction?

3. Will the Census Bureau hire non-citizens?

How can someone help make sure everyone is counted?