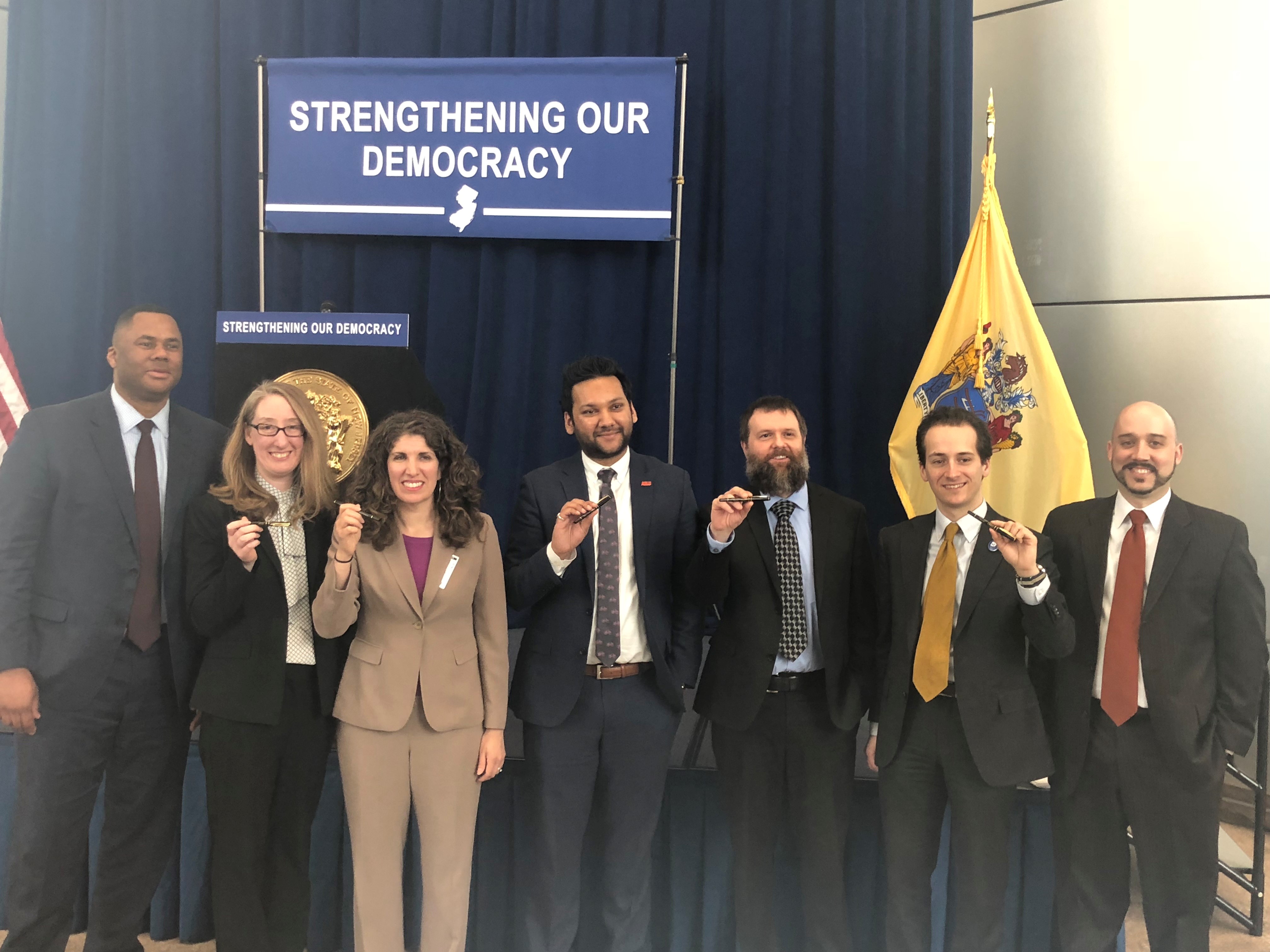 Governor Phil Murphy signed Automatic Voter Registration (AVR) legislation today, making New Jersey the twelfth state in the country to approve AVR, which allows eligible voters to be automatically registered to vote or to have their voting information updated when interacting with the Motor Vehicle Commission (MVC) unless they decline registration.

“We are building an inclusive democracy from the ground up right here in New Jersey, despite the racist, xenophobic, and dangerous policies being promoted by national leaders, including President Donald Trump,” said Ryan P. Haygood, President and CEO of the New Jersey Institute for Social Justice (Institute). “Today, we stood with Governor Phil Murphy as he signed into law one of the most expansive automatic voter registration policies in the country. This is a significant first step in positioning New Jersey to serve as a national leader and standard-bearer for robust democratic inclusion. And we are just getting started.”

The Brennan Center for Justice, the League of Women Voters of New Jersey, and the American Civil Liberties Union of New Jersey joined the Institute in applauding Governor Murphy and the legislature’s  support of this common-sense reform.

“This is a big deal for New Jersey, and a great move by Governor Murphy and the state legislature,” said Myrna Pérez, deputy director of the Democracy Program at the Brennan Center for Justice and head of its voting rights and elections project. “Automatic voter registration is more efficient and accurate, and helps create an inclusive democracy where more eligible voters are able to have their voice heard on Election Day. It’s a smart, common-sense reform, and we’re excited to see more New Jerseyans get engaged in democracy because of the change.”

Under the AVR bill passed by the Legislature and signed into law by Governor Murphy, when eligible voters interact with the MVC, the information they provide will be safely and accurately used to add their names to the voter registration rolls or update their registration unless they opt out. The bill also allows additional state government agencies to implement AVR in the future, so long as that agency is capable of accurately gathering and transferring the same information about eligible voters as the MVC currently collects.

“Automatic voter registration is smart, tested technology that has proven to be secure, boost registration, clean up our rolls, and save money,” said Jesse Burns, Executive Director of the League of Women Voters of New Jersey. “New Jersey took a huge leap forward today and we will continue to work on election reforms that expand access in service of New Jersey voters. New Jersey will serve as a model of a robust, inclusive democracy and emerge as a nationwide leader in ensuring accessibility to the ballot.”

Automatic voter registration has been shown to significantly increase the number of people who register to vote when interacting with a motor vehicles office, while also making the voter rolls more accurate and up-to-date and saving money. In Oregon—the first state to implement automatic voter registration—nearly 100,000 of the new registrants turned out to vote in 2016. Importantly, Oregon’s voter rolls are now also more reflective of the entire state population. In passing AVR, New Jersey has joined a diverse and bipartisan group of eleven other states and the District of Columbia that have adopted AVR.

“We’ve witnessed a rare moment today: a genuine expansion of our democracy,” said ACLU-NJ Executive Director Amol Sinha. “Across America, we’ve seen repeated assaults on the right to vote, from the Trump administration and from other states. But in New Jersey, we’re ready to show the country what it looks like not just to preserve voting rights, but to make them even stronger.”

“We are pleased to see New Jersey adopt this common-sense reform that will help more people register to vote,” added Institute Associate Counsel Scott Novakowski. “Expanding voter registration opportunities is only a first step, however. To fully realize our highest democratic ideals, we must continue to dismantle barriers to the ballot box, including restoring this most fundamental right of citizenship to the nearly 100,000 people on parole, on probation, or in prison in New Jersey.”