TRENTON, NJ – August 11, 2014, 2:00 P.M.  Governor Christie’s signature of Bail Reform (S946) and the Opportunity to Compete Act (A1999) will put New Jersey on the path to abolishing our pretrial “debtors’ prison” and expanding economic opportunity for redeemed individuals.

Senate Bill 946 will revamp a broken system that currently keeps nearly 6,000 people locked up before trial merely because they are unable to afford bail – not because they have been determined to be a danger to the community.  Jerome C. Harris, Jr., Interim President and CEO of the New Jersey Institute for Social Justice, said, “It is a shameful injustice that we continue to have systems that punish poverty.  The current system of pretrial release punishes New Jersey citizens of limited economic means by using bail as the sole tool of pretrial release.  S946 will reform the system by requiring that defendants be screened objectively for risk; those who pose no danger will be released, and those who are truly dangerous will be held.”

The importance of comprehensive bail reform is underscored by the story of the Institute’s client, Mustafa, who has two arrests in which the charges were ultimately dismissed.  Even though Mustafa was innocent, he was held for many months before he could make bail, was fired from his job because he could not report to work while in jail, and accrued nearly $10,000 in bail bondsman fees.  S946 will prevent people like Mustafa from losing their jobs and incurring oppressive debt.

The second law, the Opportunity to Compete Act, will allow the estimated one in four New Jersey adults with a criminal record to fairly compete for work based on merit, by requiring many employers simply to wait until after the first interview to ask about an applicant’s criminal background. 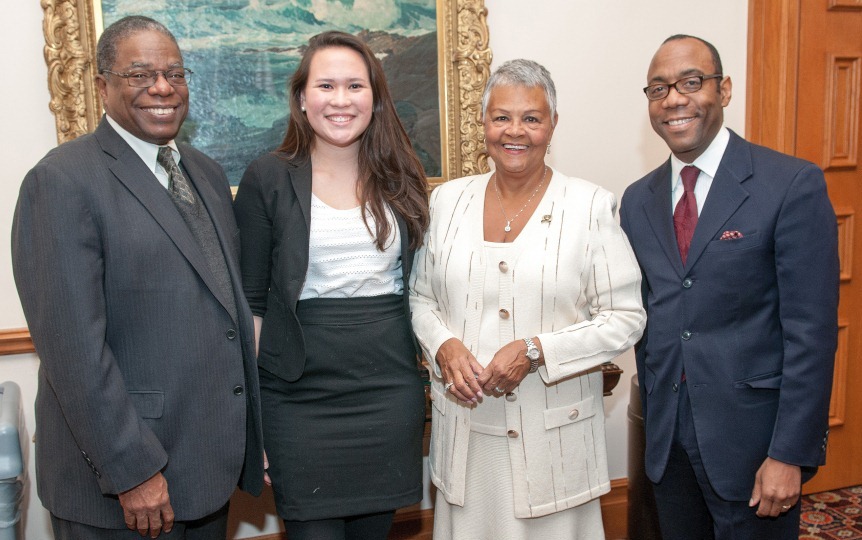 “Delaying the inquiry into applicants’ criminal backgrounds until after the first interview gives applicants an opportunity to meet potential employers face to face, and present their skills and qualifications without the mark of past mistakes clouding the employer’s first impression,” said Rev. Dr. DeForest B. Soaries, Jr., Senior Pastor at First Baptist Church of Lincoln Gardens.  “This will change the unfair practice of screening out anyone with a criminal record no matter how old or minor, as well as allow employers to find highly qualified candidates that they may have otherwise overlooked.”

“The New Jersey Institute for Social Justice applauds the extraordinary leadership of Senator Sandra B. Cunningham and Assemblywoman Bonnie Watson Coleman, along with all the other sponsors of the Opportunity to Compete Act,” said Jerome Harris.  “We have been working on this bill together for over two years, and while at times there were moments of uncertainty, neither of these remarkable legislators wavered in their confidence that they could get this done, nor did they waver in their commitment to bringing true economic opportunity to all of New Jersey’s residents.”

Enactment of both measures is only the beginning of the process.  Rt. Rev. Reginald T. Jackson, Bishop of the African Methodist Episcopal Church, Twentieth District, said of the Opportunity to Compete Act, “An earlier version of the bill, which was passed out of the Assembly Budget Committee on June 24, contained a number of important protections not present in the final version.”  For example, the final version allows employers to reject applicants based on arrests that have been dismissed.  An applicant’s entire criminal record could consist of one dismissed charge of trespass, and an employer could refuse to hire that person based on that dismissed charge, even though a dismissed charge does not give employers any information about character or past conduct.  This aspect of the final bill runs counter to other states with similar legislation, nearly all of which prohibit the consideration of arrests that have been dismissed.

Jerome Harris said, “The Institute hopes that the version of the Opportunity to Compete Act that passed will be a foundation to build on.  The Act sets forth a broad floor of reform, but not a ceiling.  We look forward to a larger conversation about how to remove unfair and overly broad barriers to employment for redeemed individuals so as to expand the pool of available workers, ensure that the best qualified person is matched to each position, and strengthen New Jersey’s economy.”

Regarding bail reform, the Institute will continue to work alongside allies like the Drug Policy Alliance, the NAACP and the ACLU of New Jersey to ensure that the law is implemented in a fair, non-discriminatory way.  The Institute hopes to participate in the development of the required Risk Assessment Instrument, building on our work developing a similar instrument used in New Jersey’s juvenile justice system that contributed to the terrific success of the Juvenile Detention Alternatives Initiative.  The Institute will sit on the newly created Pretrial Services Program Review Commission, which will participate in ongoing review of the implementation of S946.  Let us all continue to work together to shepherd in a new era of criminal justice for New Jersey.