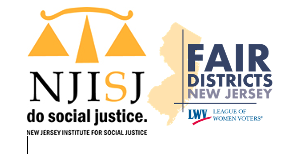 TRENTON, NJ – The U.S. Census Bureau today has released the official 2020 Census data needed to redraw congressional, legislative, and other election districts. The redistricting process determines whether all New Jersey communities will receive the representation and resources they deserve over the next ten years.

The Fair Districts New Jersey coalition calls on New Jersey’s Apportionment and Redistricting Commissions to each schedule at least 25 public hearings and prioritize public input in the mapmaking process.

“When maps are drawn with public input, the process better reflects the interests of our diverse communities,” said Philip Hensley, Democracy Policy Analyst, League of Women Voters of New Jersey. “Now that New Jersey has the necessary data needed to begin mapmaking, Fair Districts is looking forward to working with the Commissions and independent members to both support public engagement and solicit community input.”

Public involvement will help preserve communities that share common interests from being broken up in the map-drawing process, diluting their voice and representation. Fair maps help ensure that communities receive the resources they need to fund essential services, from hospitals to schools.

“During a challenging year in which advocates worked relentlessly to get as complete a Census count as possible in the face of delays caused by a devastating public health crisis, New Jersey’s Census data is finally publicly available,” said Henal Patel, Director of the Democracy & Justice Program at the Institute. “This data will allow us to see how our population has become more diverse, including with the continued growth of communities of color. When we enter the redistricting process using this data, it is critical that we hear from communities directly to ensure they are fairly represented in their new districts and are empowered to vote for representation that reflects their needs and interests.”

“While Latinos represent over 20 percent of New Jersey’s population, we remain woefully underrepresented at all levels of government,” said Latino Action Network President Christian Estevez. “It is important that Commissioners take the time to listen to Latinos and other underrepresented communities during the redistricting process and choose maps that truly reflect the diversity of our state.”

"Immigrants are an essential part of New Jersey but too often, policymakers only consider our communities during heritage celebrations or as charity cases. We are here to make sure that's no longer the case," said Amy Torres of the New Jersey Alliance for Immigrant Justice. “NJAIJ is proud to stand with the Fair Districts coalition because today’s Census data release again demonstrates what many of us have long known: New Jersey is growing more diverse. Our state is growing fastest among communities of Color, immigrants, and people with immigrant heritage. All New Jerseyans deserve equal access to decision-making spaces and through the redistricting process, our communities are ready to demand it."

This decade’s redistricting must not be conducted by a handful of politicians, drawing districts behind closed doors. New Jersey deserves a fair, transparent and community-driven process.

“Key to garnering the maximum amount of public participation is ensuring a multitude of ways in which to engage with local communities at each meeting. Given that New Jersey is one of the most diverse states in the nation, investment in translation services across media before, during, and after these meetings is a must-have. Diverse communities are thriving communities. Our data must accurately reflect what our communities truly look like in order to build a strong foundation for future generations of New Jerseyans,” said Blair Nelsen, Executive Director, Waterspirit.

"New Jersey needs a stronger democracy and that starts with fair districts. I commend our partners on their efforts to educate New Jerseyans about fair districts and look forward to engaging in a process that is open, transparent, and welcoming to public input. Representation- not politics- should be at the center of this work,” said Sue Altman, State Director, New Jersey Working Families.

Fair Districts New Jersey continues to urge redistricting procedures that guarantee that this cycle's redistricting process will measure up to New Jersey’s shared values of fairness, equity, and democracy. In addition to ample public hearings, the coalition has also called for clear, nonpartisan line drawing standards and robust informational websites that allow for public submission of maps and testimony. Fair Districts New Jersey has also called on the Commissions to commit to making the commissions' maps publicly available, hold public hearings on the proposed map prior to certification, and produce a publicly accessible written report justifying all map-making decisions.