Join The Movement For The 94 Percent 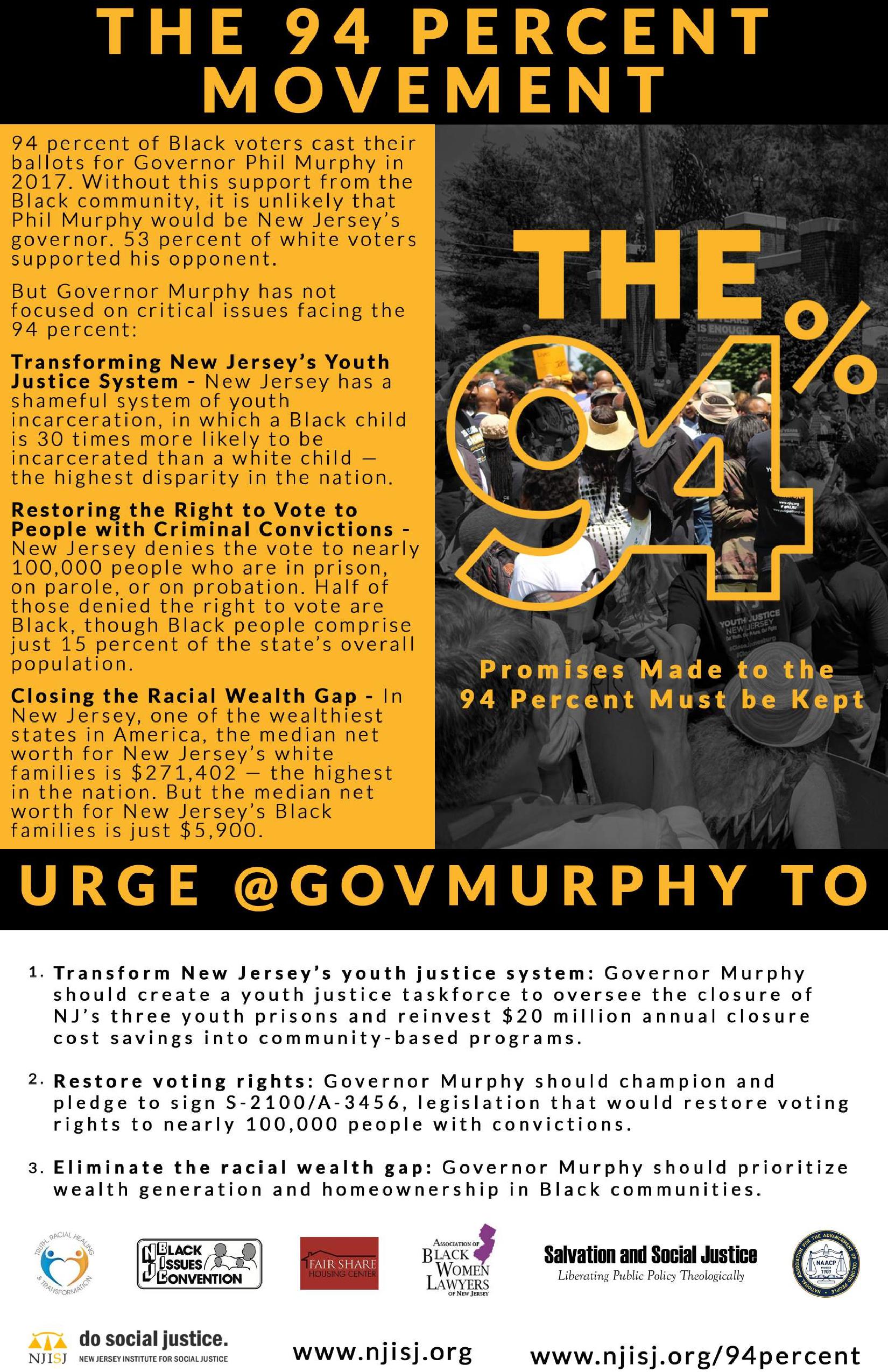 Unmoved by a New Jersey nor'easter, a capacity crowd of hundreds of people returned to the church in Newark where Dr. Martin Luther King, Jr., spoke fifty years ago to build the "Poor People's Campaign" to rally for the #94Percent.

We are holding Governor Phil Murphy accountable to Black voters, ninety-four percent of whom voted for him.  Without this support from the Black community, it is unlikely that Phil Murphy would be New Jersey's governor: Fifty-three percent of white voters supported his opponent.

That rally is now a movement built from the ground up—the Movement for the #94Percent. This is a movement for accountability by and for the people. Inspired by Dr. King's unfinished work, our charge is to advance unapologetically progressive policies and practices that build wealth in Black communities, transform youth justice, and restore voting rights to people with criminal convictions.

And we have already been heard! On the eve of the #94Percent rally, Governor Murphy signed an executive order creating a youth justice task force. "New Jersey has the shameful distinction of having the largest black-white youth incarceration gap in the nation," Governor Murphy said. "We cannot and will not accept these inequities any longer."

This is an important first step toward building a transformed youth justice system that makes deep investments in our kids, not in prisons. And we are just getting started.

The Institute and its partners call on Governor Murphy to take action on the following racial justice issues:

In the wake of the historic youth prison closure announcements, Governor Murphy should dedicate his time, platform, and resources to prioritizing the fundamental transformation of New Jersey’s failed youth justice system. This will require Governor Murphy to commit to addressing the structural racism that devours young Black and Brown kids in the current system.

To begin that transformation, Governor Murphy’s youth justice task force should create and oversee a comprehensive youth justice plan that, with meaningful community input, addresses the policies and practices that drive the racial disparities, prioritizes alternatives to incarceration and rehabilitation, and invests the anticipated $20 million closure cost savings into community-based programs in neighborhoods most impacted by incarceration. The commission should also develop a plan and timeline for the closure of New Jersey's three youth prisons, including its most secure youth prison—the Juvenile Medium Security Facility. No construction should commence before the commission issues its recommendations.

Governor Murphy should also hold public hearings throughout the state to provide updates on the status of the youth prison closures and to seek meaningful input on next steps.

Join the Movement for the #94Percent at njisj.org/94Percent to keep abreast of all updates.