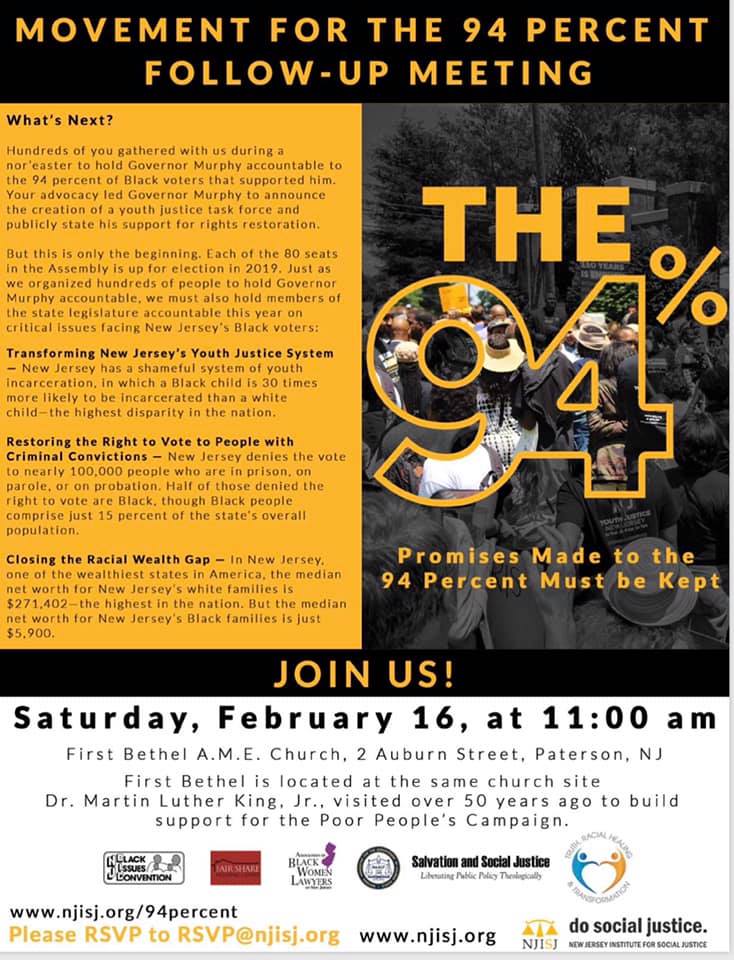 Five hundred of you joined us during a nor'easter to hold Governor Phil Murphy accountable to the 94 percent of Black voters who voted for him. We called on him to focus on three key racial justice issues: transforming the youth justice system, restoring the right to vote to people with criminal convictions, and eliminating the racial wealth gap.

As a direct result of our Movement for the 94 Percent, Governor Murphy created a youth justice task force, stated his support for rights restoration, and identified the racial wealth gap as a shameful disparity that New Jersey must remedy.

But this is only the beginning: As Dr. Martin Luther King, Jr., shared during his 1968 visit to Paterson, we must keep moving forward. In a year when all 80 General Assembly seats are up for election, we must ensure that all of our elected officials in New Jersey make social and racial justice top priorities.

Transforming the Youth Justice System: New Jersey has a shameful system of youth incarceration, in which a Black child is 30 times more likely to be incarcerated than a white child- the highest disparity in the nation.

Restoring the Right to Vote to People with Criminal Convictions: New Jersey denies the vote to nearly 100,000 people who are in prison, on parole, or on probation. Half of those denied the right to vote are Black, though Black people comprise just 15 percent of the state's population.

Governor Murphy should commit to signing and using the power of his office to urge the passage of S-2100/A-3456, historic legislation that will restore the precious right to vote to people in prison, on parole, or on probation.

Join us for the Movement for the 94 Percent follow-up meeting to discuss the next steps of our movement. The meeting will take place on Saturday, February 16, at 11:00 am at First Bethel A.M.E. Church in Paterson. This is the same site where Dr. King spoke the above famous words over fifty years ago to build support for the Poor People's Campaign.