1844 No More: Restoring Voting Rights to People with Criminal Convictions 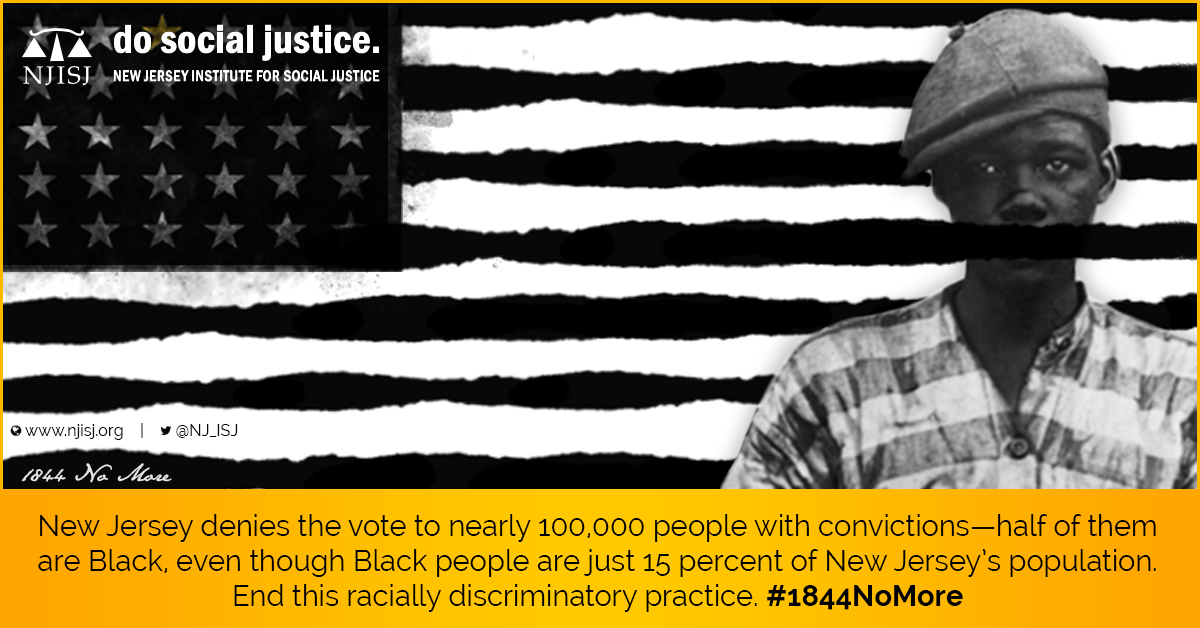 On December 14 at 11:00 AM, the New Jersey Institute for Social Justice (Institute) hosted a press call with state legislators and civil rights leaders to call for an end to New Jersey’s practice of denying the right to vote to people with criminal convictions.

“New Jersey currently denies the right to vote to more than 94,000 people with criminal convictions—more than the total population of Trenton, the state’s capital,” said Ryan P. Haygood, Institute President and CEO.  “Shamefully, more Black people in New Jersey are denied the right to vote because of a criminal conviction today than were prohibited from voting before the 15th Amendment was passed in 1870. To erase this moral stain on our democracy, we must restore the right to vote to people who are either on probation, parole, or in prison. Doing so would make New Jersey a national example of an inclusive democracy.”

Today, Senator Ronald Rice announced that he plans to introduce legislation to restore voting rights to people with criminal convictions.

“In the new year I will introduce a bill to restore voting rights to people on parole, probation, and those in prison. New Jersey has an opportunity to be a national leader on this important issue of racial justice,” said Senator Ronald Rice. “I call on Governor elect Phil Murphy and my fellow legislators to join me when I say, ‘We are 1844 no more.’ And I ask for their support of my bill to sever the antidemocratic link between the right to vote and the criminal justice system.”

“It’s time for New Jersey to be bold. Merely restoring the right to vote to people living in the community on parole or probation, while necessary, is not sufficient to remedy the deep-seated racial disparities,” said Senator Sandra Cunningham. “Like our neighbors in Maine and Vermont, New Jersey must guarantee the fundamental right to vote to all its citizens, whether in prison or living in the community while on parole or probation. I look forward to working with my colleagues in the legislature and Governor-Elect Murphy to make New Jersey a national leader in strengthening our democracy and advancing racial justice.”

In conjunction with the press call, the Institute released a report today, We Are 1844 No More: Let Us Vote, which shows the state’s voting ban has a disparate impact on Black residents, a result of linking the right to vote with a criminal justice system infected with racial discrimination. According to the Institute’s report, New Jersey enacted its first broad ban on voting by people with criminal convictions in 1844, the same year it adopted a state constitution that restricted voting to white men and a time when slavery was still legal in New Jersey. (For a PDF of the report, please click here.)

“Nearly 175 years later, though legal slavery is abolished, New Jersey continues to deny voting rights to people with criminal convictions, a practice that disproportionately impacts Black New Jerseyans,” said Institute Associate Counsel Scott Novakowski, primary author of the report. “Consistent with the racist era in which it was conceived, New Jersey’s law has a devastating impact on Black political power. To finally turn the page on this history, we are launching ‘1844 No More: Let Us Vote,’ a campaign to restore voting rights to people with criminal convictions.”

New Jersey leads the nation in racial disparities in Black/white incarceration rates for both adults and youth. Black adults are twelve times more likely to be incarcerated than their white peers, and Black youth are more than thirty times more likely to be imprisoned than white youth. Importantly, a significant proportion of these disparities cannot be explained by differing rates of offending.

By linking the right to vote to the criminal justice system, the New Jersey’s law causes these disparities to be reproduced in the political process:

Although Black people comprise just 15 percent of New Jersey's overall population, they represent, incredibly, about half of those who have lost their voting rights as a result of a criminal conviction.

Overall, 5.28 percent of New Jersey’s Black voting age population is without a voice in the political process, a rate over twice that of many of our neighbors in the Northeast. The percentage of Black men prohibited from voting is considerably higher.
Just five counties—Essex, Camden, Hudson, Monmouth, and Ocean—are home to almost half of those removed from the rolls. Those same five counties contain 46 percent of the state’s Black population.

Civil rights leaders have joined the call to restore voting rights to people with criminal convictions:

“No one should ever lose the fundamental right to vote, regardless of whether they have a criminal conviction,” said ACLU-NJ Executive Director Amol Sinha. “The well-documented patterns of harsher sentencing and over-policing in Black communities translate into massive, disproportionate disenfranchisement of people of color. To be a true democracy, New Jersey must ensure more people vote, not fewer. To do so, our state must swiftly end disenfranchisement and allow people with criminal convictions to vote.”