This past Sunday, my team at the New Jersey Institute for Social Justice joined thousands of people in a march across the Edmund Pettus Bridge in Selma, Alabama to commemorate the 54th Anniversary of “Bloody Sunday” and to honor the heroes who shed blood to secure the fundamental right to vote.

We can honor their memory right here in New Jersey by fulfilling their goal of ensuring that everyone, regardless of race or criminal history, can exercise that sacred right. 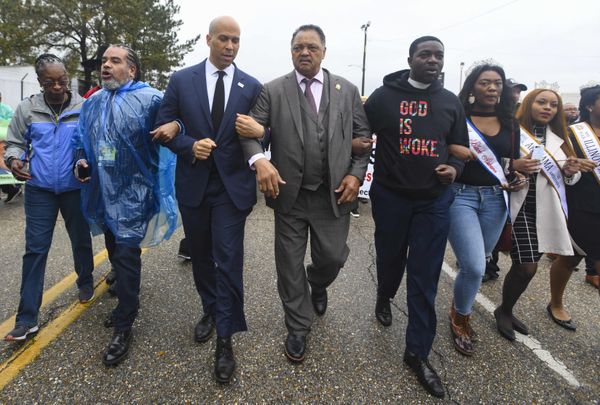 In a transformative expansion of democracy, Florida voters recently overturned a Jim Crow law and restored the right to vote to 1.5 million people with convictions.

Now it is New Jersey’s turn.

Last month, people across New Jersey filled every seat in a Senate hearing to urge passage of S2100 and A3456, historic legislation by Senators Ronald Rice and Sandra Cunningham, and Assemblywoman Shavonda Sumter, that will restore voting rights to nearly 100,000 people in prison, on parole, or on probation.

During the hearing, Senator Brian P. Stack said that this “great piece of legislation” is “long overdue” and needs to be “voted out and...signed by the governor.”

Voting for people with convictions, as my colleague Ron Pierce explains, has value to the soul, and it connects individuals to the broader community. Studies show that voting helps to reduce recidivism and increase the chances of a successful integration upon release. Once released, having a voice in the governance of one’s environment enhances one’s investment in being a positive force within it.

Senator Stack is also right that correcting this wrong is long overdue.

As we explain in our report 1844 No More: Let Us Vote, the story is often told about how racist Southern legislatures historically built democracies that excluded Black people, other people of color and women.

What is less well known is that this history of exclusion also took place right here in New Jersey.

It is against this racist historical backdrop that New Jersey further restricted access to the ballot box by denying the vote to people with criminal convictions in 1844, the same year it restricted voting to white men.

New Jersey’s decision to maintain this practice in 2019, 175 years later, accomplishes the same racial exclusion that was common in 1844.

Today, New Jersey denies the right to vote to nearly 100,000 people because of a conviction — more people than live in Trenton, Camden, Hoboken, Montclair, and in each of more than 150 other municipalities in New Jersey.

Although Black people comprise just 15 percent of New Jersey's overall population, they represent more than half of those who have lost their voting rights as the result of a criminal conviction.

This disparate impact on Black political power is a direct result of New Jersey’s decision to connect the fundamental right to vote to its criminal justice system, which is infected with racial discrimination.

New Jersey has the shameful distinction of having the highest Black/white adult and youth incarceration disparity rates in America. A Black adult in New Jersey is 12 times more likely to be incarcerated than a white adult. A Black child is 30 times more likely to be detained or committed than a white child — even though Black and white young people commit most offenses at about the same rate.

But today, we aren’t judging New Jersey by this shameful past.

Instead, we are embracing an important opportunity to turn the corner on this shameful history.

More than 100 organizations, as well as the mayors of major cities — including Newark, Jersey City, and Hoboken — have joined the call to restore voting rights to people in prison, on parole, and on probation in New Jersey.

Our collective task, particularly in this difficult national moment, is to reduce barriers to voting and to encourage more people to participate in the political process. And it must be done comprehensively, because restoring voting rights to only those on parole or probation – and not the incarcerated – would worsen the racial disparity by increasing the percentage of people denied the right to vote who are Black to a staggering 62 percent.

Join us in erasing this moral stain on our democracy by urging Senate President Sweeney and Speaker Coughlin to post, the New Jersey Legislature to pass, and Governor Murphy to sign, S-2100/A-3456 without delay so that nearly 100,000 more New Jersey citizens can vote this November, an election in which all 80 seats in the New Jersey Assembly are up for election.

It’s time to join Maine, Vermont, and most Western democracies and pass legislation to end New Jersey’s practice of denying voting rights based on a conviction in a racially discriminatory criminal justice system.

Ryan P. Haygood is president and CEO of the New Jersey Institute for Social Justice